Druk Diaries: Day 4 of the drive, Asansol to Siliguri

13-April-2015
The excitement was building as we were nearing the Bhutan border. We found out that one of the Jyotirling, Vaidyanath is in Deoghar. So we decided to take a small detour and visit the temple enroute to Siliguri.
4:50 AM Started from the hotel at Asansol. The road towards Dumka and Deoghar is narrow but the surface was good for most part.

6:33 AM Crossed Dumka town. The town entry and exit seems messy. We were there early in the morning so did not face any hassle but I can see how in day time it could be crowded.
7:30 AM Reached Deoghar. Found parking near temple, hassled with pandas. Unfortunately temple took too long. It was extremely crowded.

Deoghar, also known as Baidyanath Dham, is an important Hindu pilgrimage site. It is one of the twelve jyotirlingam and also one of the 51 shaktipeeths. It is, along with Shrisailam, one of the few places in India where the jyotirlinga and the shaktipeeth are together, lying sided beside each other. Baidyanatham chithabhoomau (वैद्यनाथम् चिताभूमि) [शिवमहापुराण कोटिरुद्रा संहिता 1/21-24] is the ancient verse that identifies location of vaidyanth jyotirlinga. According to which Baidyantham is in 'chidabhoomi', which is the ancient name of Deoghar. While, the same part of text has variation by which, verse is paralyam vaidyanatham (परल्यम् वैद्यनाथम्) , i.e., Vaidyanatham is in Parli, Maharashtra. Thus the three temples of, Baiydanath temple at Deoghar, Jharkhand, Vaijnath temple at Parli, Maharashtra and Baijnath temple at Baijnath, Himachal Pradesh are claiming their shrines as 'real' jyotirlinga of Vaidyanath.
In Dwadasa jyothirlinga sthothram(द्वादश ज्योतिर्लिंग स्त्रोत्रम), Adi Sankaracharya has praised Vaidyanath jyothirlinga in following verses,
पूर्वोत्तरे प्रज्वलिका निधाने
सदा वसंतम गिरिजा समेतम्
सुरासुराधिता पदपद्मम्
श्रीवैद्यनाथम् त्वमहम् नमामि
Poorvothare prajwalika nidhane
sada vasantham girija sametham
surasuraradhitha padapadmam
srivaidyanatham thamaham namami
This states that Vaidyanath jyotirlinga is located at Prajwalika nidhanam (meaning funeral place i.e., chithabhoomi) in the North-Eastern part of the country. This explaination suits more to Deoghar compared to Parali-Baijnath which is in Maharashtra.
11:00 AM Finally managed to come out of temple after darshan etc. Everybody was hungry because we did not even have breakfast till that time. So we decided to pay a visit to Hotel Amrapali Clarks Inn and have something to eat there. 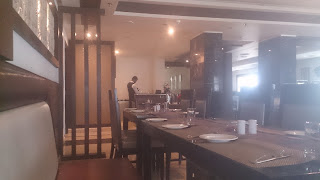 By the time we reached there, the breakfast service was over and lunch service had not started. They told us that they can provide us with some sandwiches. After some negotiations, they agreed us to make some parathas for us and that was almost godsend. Here is my review of the place.
Now that we were done with immediate issues, we started back on our drive towards Siliguri. One of the locals suggested that we go through Banka. Although I don't know the alternate route, it seems the other route is better. We really did not face any problem through this route either.
12:15 PM Left the hotel towards Banka
1:30 PM Crossed Banka
2:25 PM Reached outskirts of Bhagalpur town. We continued on SH-25 to finally join the road that connects to the bridge. SH-25, just before it connects to SH-19 has been dug up and we were stuck there. Finally we retraced our steps back and got into the thick of the city that goes near the railway station. After this mess, we were stuck near a railway crossing. The gates took more than 15 minutes to open.
It was an hour long ordeal and we finally were out of the other side of the town.

3:40 PM Crossed Bhagalpur town and crossed the bridge over the Ganga.
Soon after the bridge, we saw a hotel and decided to halt for some tea and food. The name of the place is Hotel Vaibhav Highway Inn. Here is my review of the hotel.