Everytime I have to travel by air, the night before travel, I am reminded of the reasons why I hate air travel in India. For example, I need to travel from Bengaluru to Port Blair, which should not be more than a 3 hours flight. But I have to get up at 3 AM, take a flight to Chennai and I will reach Port Blair only around 2:40 PM. Most of this time you are sitting in a airport which in itself is a make belief world.

I decided to book a cab the night before and I realized that it is impossible to reach a human to book a cab. I seriously believe that this app only world is going to kill us one day. Anyways, tried Ola Cab and they said that for the window that I am looking for a taxi, all the taxis are booked and I should try 15 minute before the journey. Uber just said that only way to book a taxi is 15 minute before journey. Finally Meru app allowed me to book a taxi. Thinking that there is still some hope for this world, I slept.

As I got up, I see a message from Meru with a taxi number etc. We got ready, the taxi had still not arrived  and it was beyond the time that I had booked it for. I opened the Meru app and the location of taxi was in Arabian Sea. I suspected that something was amiss.  I called the taxi driver number, for first few times, nobody picked up and then it went switched off. Now I was getting worried. Tried Uber app, they politely said no taxis are available. Finally tried Ola again and there was a tax near my house which was showing 5 minutes away. I called that guy, he said he is coming. No taxi still and it was half an hour past  my comfortable departure time. Finally few calls and SMSes later, the taxi fellow showed up and we started to Airport.

Bengaluru Airport has been declared a silent airport so there are no announcements, that is a good thing because earlier announcements were anyway hard to understand.
Finally Indigo announces boarding and there is a complete stampede for boarding. Everybody is standing, pushing and jostling with each other as if it is the end of the world and this is the Noah's Ark in which only one couple from each species will be allowed. After 15 minutes, Indigo realizes that they forgot to get the bus which will take the passengers to the aircraft.
Eventually everything falls in place and we are on board the aircraft for a 40 minute flight. We have already spent 4 hours of a good early morning to take a 40 minute flight.
6:15 AM Left Bengaluru Airport 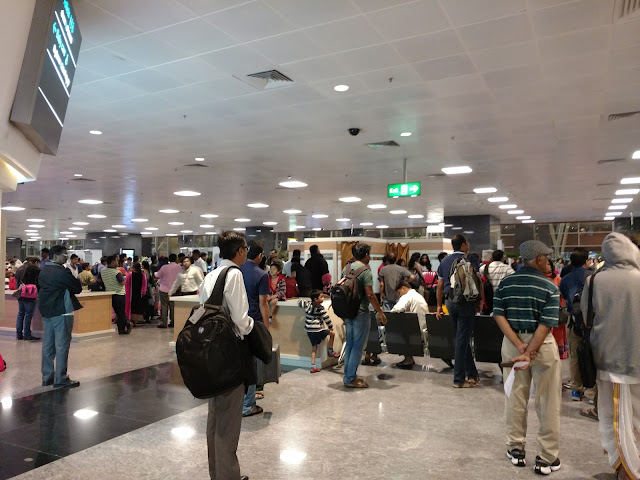 7:25 AM Chennai Airport has improved quite a lot since I visited it last in the year 2009. It is still nowhere compared to Bengaluru or Delhi. We had to kill good 5 hours on the airport before the flight to Port Blair would be ready.
12:00 PM Left Chennai Airport to Port Blair.
2:15 PM Arrived in Port Blair Airport.
If you book Barefoot at Havelock, they provide complete transit arrangements to/from Port Blair. They will pick you up at the airport, drop at hotel, put you up in ferry, pick up at havelock and all the things above for return journey. In our case the havelock journey was after 4 days, but they still arranged everything. So we saw a friendly face from Barefoot, they dropped us at our hotel in Port Blair. We were staying at Fortune Resort Bay Island. Here is my review of the place.
Posted by vavasthi at October 27, 2015