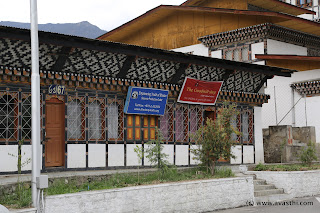 The first business of the day was to have the permit extension done so that we are free to travel to other parts of Thimphu. We believed it should not take much time. We had downloaded a set of form for permit extension, had the list of places that we wanted to visit, copies of original permits etc.
11:00 AM We left for the immigration office.

The immigration office is at Norzin Lam which is not too far from where we were staying. So we decided to walk there. It is almost 45 minutes walk to the office. The office is at the end of Norzin Lam just where the handcraft market ends. On the junction, it is just couple of building earlier.
I went inside. The lady at the counter looked at my forms and gave me another form to fill for the whole group. The forms that I had downloaded were meaningless. The good thing was that I had to fill a single form for the whole group.
You have list down every municipal area that you wish to visit. We listed following areas.
The lady at the counter told me that they generally don't give out permits for Lhuentse, since I had already realized that I did not have time to visit all the places, I told her to just remove it. After giving the forms, I was told to come back in 2 hours.
Since we had walked to the place, this created a dilemma. What to do for two hours. My wife and daughter decided to shop around in the handicraft market on the road and kill the next two hours. I took some photographs around the place. 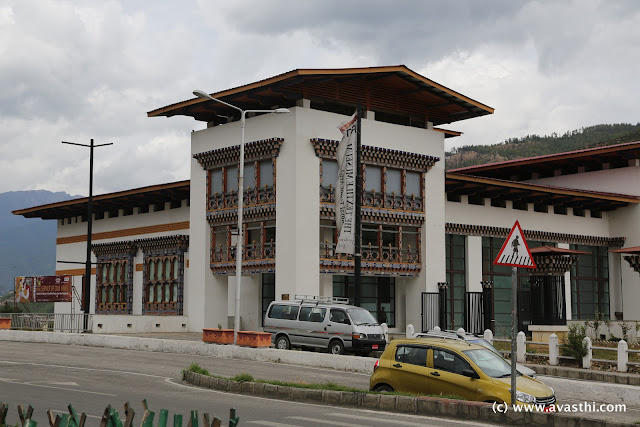 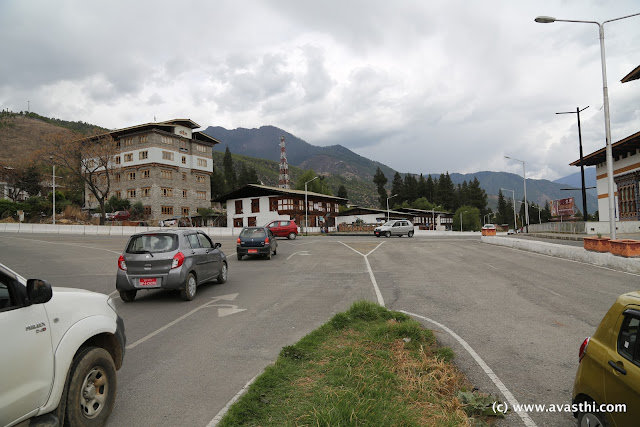 Phallus paintings in Bhutan are esoteric symbols, which have their origins in the Chimi Lhakhang monastery near Punakha, the former capital of Bhutan. The village monastery was built in honour of Lama Drukpa Kunley who lived in the 15-16th century and who was popularly known as the "Mad Saint" (nyönpa) or “Divine Madman” for his unorthodox ways of teaching, which amounted to being bizarre and shocking. These explicit paintings, though embarrassing to many in urban population now (this folk culture is now informally discouraged in urban centers), can be seen painted on the walls of houses and buildings throughout Bhutan, particularly in villages, and are credited as Kunley's creations. Traditionally symbols of an erect penis in Bhutan have been intended to drive away the evil eye and malicious gossip.

You could buy artifacts like above or even keychains etc. There were phallus with eyes etc as well.

I found the building of Nehru Wangchuck cultural center interesting. From a distance it looks like any other typical Bhutan building, as you get closer, you find it is furnished in a more modern fashion. 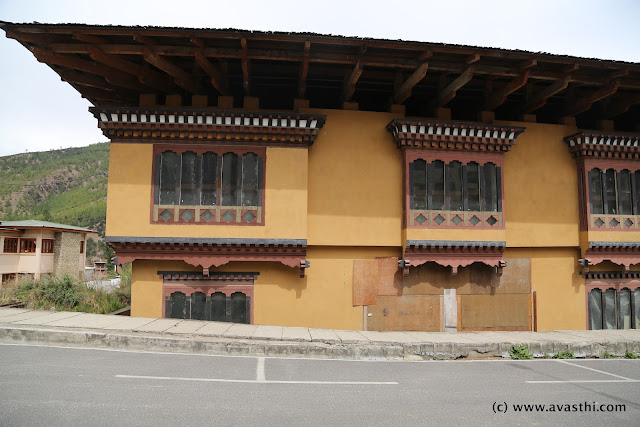 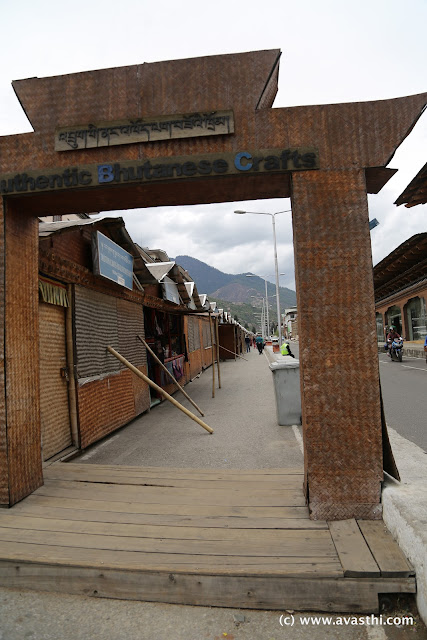 After successfully killing 2 hours, when I went back to the immigration office, the permit was still not ready because the officer was not there. So we decided to go back to hotel, have our lunch and then come back in car.
3:00 PM Done with the lunch, and started back to immigration office in car. One reason for going in car was that after doing the immigration bit, I also had to go to RSTA office and get the RSTA permit endorsed for all these new areas.
When I reached at the immigration office, the permit was ready. As soon as you get the permit, get few copies made. There is a shop couple of buildings away (towards the junction) from the immigration office where they do xerox for you.
The next stop was RSTA office. For reaching RSTA office, you have to get to Chang Lam, go till the end and then turn left on the bridge. There are two left turns, one leads to Paro expressway while other goes over a bridge. Just after the bridge, on left there is RSTA office.
Once you have parked in RSTA office, look for stairs going down. Once you go down, there is a building where you will see ticket counters for buses within Thimphu. Look for Base office. That's where you will get RSTA endorsement. The officer will ask to look at the original for permit and permit extension and ask you to leave a copy of these documents with you. He will hand write the vehicle permit extension on back of the original permit.
4:45 PM With both of these done, we were ready for our travel within Bhutan.
It was almost 4:45 PM. We decided to go to Buddha Dordenma statue. After a while realized that we have no idea how to reach there. So we decided to postpone the place to that place for next day and just drove around aimlessly for 30-45 minutes. Then we just walked around in the market and called it a night.

We had expected permit work to be over very quickly but it took almost the whole day for us. The only saving grace is that for permit extension you don't need everybody from the group so my family was able to do some shopping.
I think if one intends to travel beyond Thimphu and Paro, you should keep one full day in Thimphu spare so that you can take care of these bureaucratic hassles. As we realized later, even Haa valley needs permit and we did not get it done as part of original permit extension so we had to do it later.
Posted by vavasthi at May 07, 2015