16-April-2015
10:00 AM We got ready after breakfast and started our journey towards the local destinations in Thimphu. The first destination was Buddha Dordenma.
10:35 AM After a short drive, we were in Buddha Dordenma. The roads are good and drive is pleasant.
Buddha Dordenma is a impressive monument. It is visible from the whole of Thimphu. This massive statue of Shakyamuni measures in at a height of 51.5 meters, making it one of the largest statues of Buddha in the world. The statue is made of bronze and is gilded in gold. 125,000 smaller Buddha statues have been placed within the Buddha Dordenma statue, 100,000 8 inch tall and 25,000 12 inch tall statues respectively. Each of these thousands of Buddhas have also been cast in bronze and gilded. The throne that the Buddha Dordenma sits upon is a large meditation hall.
The place is still under construction and we were not allowed inside. 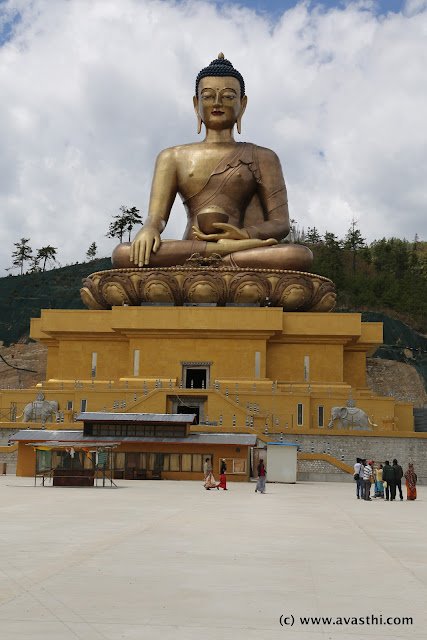 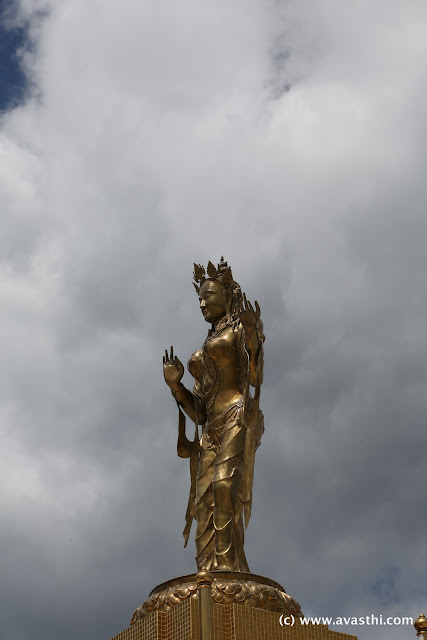 11:00 AM We leave the place and start our drive back to the Thimphu town.
11:20 AM We are back at the town and we stop at National Memorial Chorten. 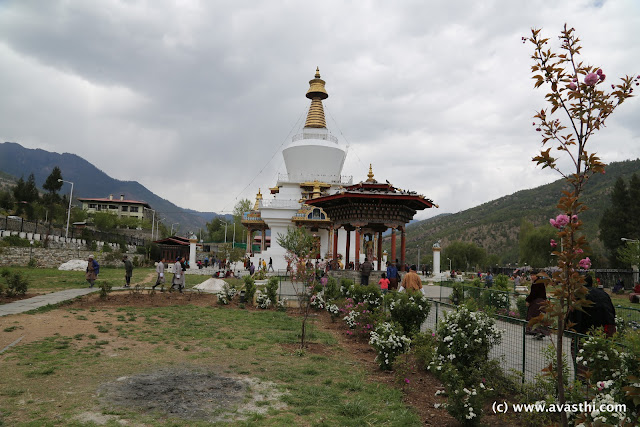 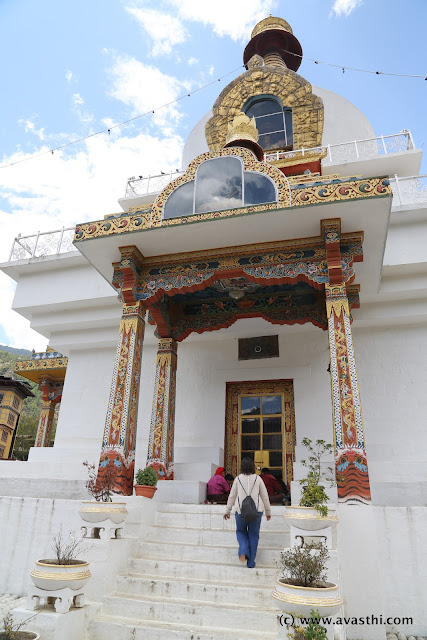 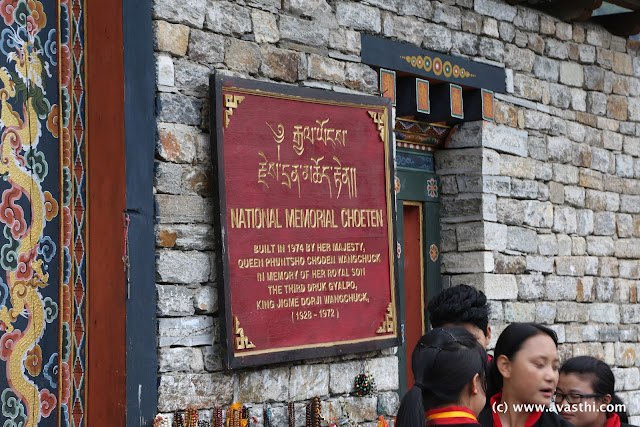 The Memorial Chorten, also known as the Thimphu Chorten, is a chorten in Thimphu, Bhutan, located on Doeboom Lam in the southern-central part of the city near the main roundabout and Indian military hospital. The chorten, built in 1974 to honour the 3rd King of Bhutan, Jigme Dorji Wangchuck (1928–1972), is a prominent landmark in the city with its golden spires and bells. In 2008, it underwent extensive renovation.
It is probably most popular monument in the town as it was most crowded specifically with non-tourist kind of crowd.
11:40 AM We leave the chorten and start our journey towards Dochu La.
Normally you would visit Dochu La on the way to Central and East Bhutan. We decided to visit this place from Thimphu and come back to Thimphu which probably is not the brightest idea. Nevertheless, when you go to Dochu La, you have to pass through Hungtsho check-post.
The Dochu La is not very far from the check-post, I think it is less than 10 kilometers from check-post.
1:00 PM I reached Dochu La pass.
Dochu La is at a height of 3116m and it does get little chilly there. So be prepared with a jacket or something like that. There are a hundred and nine chortens (stupas) in three tiers of forty five, thirty six and twenty seven circumscribing a single larger chorten at the top. This chortens are called Druk Wangyal Chortens or ‘Stupas of Victory’. The building of these chortens was initiated by Queen Mother Ashi Dorji Wangmo Wangchuck when her husband the fourth King, travelled to the South-East of the country in December 2003 leading his army against the insurgents from India. 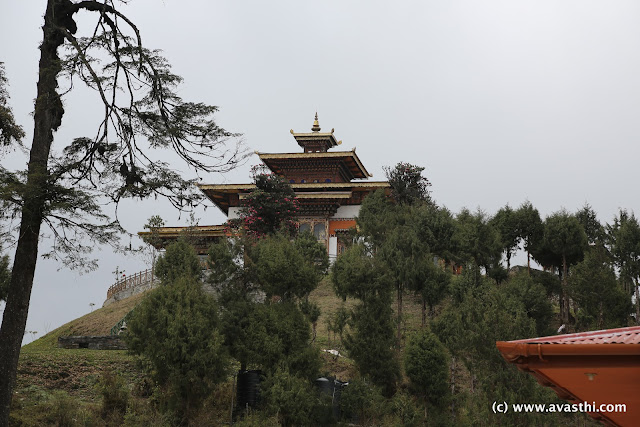 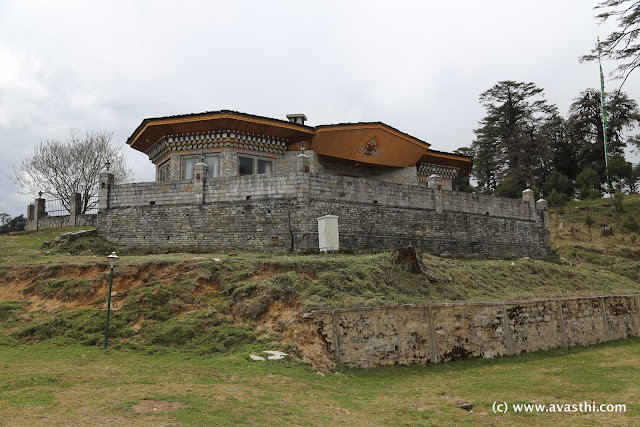 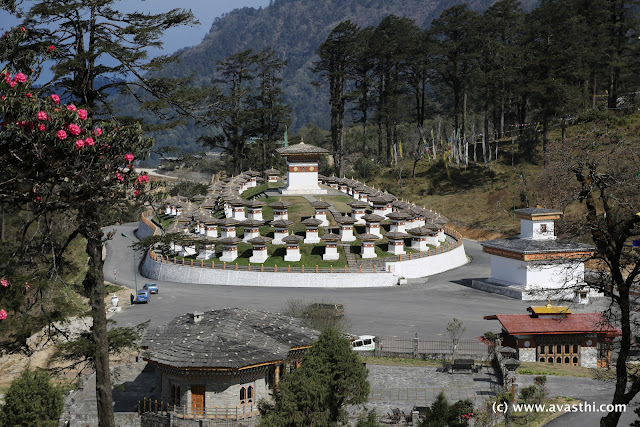 There is a very good cafe, Druk Wangyal Cafeteria, just opposite the Dochu La and you can ask them to prepare your lunch or snack. They give decent Indian, Bhutanese and Continental dishes.

2:40 PM We start back towards Thimphu.
2:50 PM We reach check-post again. People who are travelling back to Thimphu but intend to travel to central and east should remember to take the permit back from the immigration checkpost. By default they would assume that you have visited the central and east and coming back and they would keep the permit extension with themselves. Atleast that's what happened to us. But on telling them that I will again travel on the same road tomorrow, they stamped and returned it back.
3:40 PM We reached the Thimphu town. We decided to fill up the car since the next day was a long drive. We only spotted one petrol station near where we were staying. It is on one end of Norzin Lam. I am sure there would be others, but we did not see them.


4:00 PM We were back in hotel. We decided to rest for an hour and then just walk around the market place. Thimphu is a very comfortable town to just walk around. We also bought couple of paper maps for Thimphu, Paro and whole of Bhutan since google maps were turning out to very inaccurate.
There are couple of book stores on the road connecting Chang Lam and Norzin Lam and one could get maps there.


As the night fell, we decided to try some other hotel for food. As we were travelling to smaller cities and not sure of food of our liking, we decided to visit Taj Tashi for dinner. It is just off Norzin Lam.
Here is my review of the food in the hotel.
Finally we walked back to hotel.
9:30 PM We were back in hotel. We slept because tomorrow was going to be an long drive and an exciting day.
Posted by vavasthi at May 07, 2015