10-October-2016
One of the most important places that I wanted to visit as part of this trip is The Residency in Lucknow. If you want to get a real feel of 1857, this is the place to go. The hotel told us that the place is closed on Monday. That was a great dampener. But we decided to check out the place anyway and fortunately for us the place was open. It closes on Friday.

On 23 May, Lawrence began fortifying the Residency and laying in supplies for a siege; large numbers of British civilians made their way there from outlying districts. On 30 May (the Muslim festival of Eid ul-Fitr), most of the Oudh and Bengal troops at Lucknow broke into open rebellion. In addition to his locally recruited pensioners, Lawrence also had the bulk of the British 32nd Regiment of Foot available, and they were able to drive the rebels away from the city.

On 4 June, there was a rebellion at Sitapur, followed by another at Faizabad,  and outbreaks at Daryabad, Sultanpur and Salon. Thus, in the course of ten days, British authority in Awadh practically vanished.

On 30 June, Lawrence learned that the rebels were gathering north of Lucknow and ordered a reconnaissance in force, despite the available intelligence being of poor quality. The expedition was not very well organized. The troops were forced to march without food or adequate water during the hottest part of the day at the height of summer, and at the Chinhat they met a well-organised rebel force, with cavalry and dug-in artillery. Whilst they were under attack, some of Lawrence's sepoys and Indian artillerymen defected to the rebels. His exhausted British soldiers retreated in disorder. Some died of heatstroke within sight of the Residency.

As a result of the defeat, the detached turreted building, Machchhi Bhawan (Muchee Bowan), which contained 200 barrels (~27 t) of gunpowder and a large supply of ball cartridge, was blown up and the detachment withdrew to the Residency.

Lawrence retreated into the Residency, where the siege now began, with the Residency as the centre of the defenses. The actual defended line was based on six detached smaller buildings and four entrenched batteries. The position covered some 60 acres (240,000 m2) of ground, and the garrison (855 British officers and soldiers, 712 Indians, 153 civilian volunteers, with 1,280 non-combatants, including hundreds of women and children) was too small to defend it effectively against a properly prepared and supported attack.

On 1st July Lawrence was fatally wounded by a shell, dying on 4 July. Colonel John Inglis of the 32nd Regiment took military command of the garrison. Major John Banks was appointed the acting Civil Commissioner by Lawrence. When Banks was killed by a sniper a short time later, Inglis assumed overall command.

On 16 July, a force under Major General Henry Havelock recaptured Kanpur. On 20 July, he decided to attempt to relieve Lucknow, but it took six days to ferry his force of 1500 men across the Ganges River. On 29 July, Havelock won a battle at Unao, but casualties, disease and heatstroke reduced his force to 850 effectives, and he fell back.

The advance resumed on 18 September under the command of Sir James Outram. The force met heavy resistance trying to cross the Charbagh Canal, but succeeded after nine out of ten men of a forlorn hope were killed storming a bridge.  Outram proposed to halt and contact the defenders of the Residency by tunneling and mining through the intervening buildings, but Havelock insisted on an immediate advance. In all, the relief force lost 535 men out of 2000, incurred mainly in this last rush.

By the time of the relief, the defenders of the Residency had endured a siege of 87 days and were reduced to 982 fighting personnel.

Outram had hoped that the relief would also demoralize the rebels but was disappointed. For the next six weeks, the rebels continued to subject the defenders to musket and artillery fire and dug a series of mines beneath them. The defenders replied with sorties, as before, and dug counter-mines. 21 shafts were sunk and 3,291 feet of gallery were constructed by the defenders. The enemy dug 20 mines: 3 caused loss of life, 2 did no injury, 7 were blown in and 7 were tunneled into and their galleries taken over.

The defenders were able to send messengers to and from the Alambagh, from where in turn messengers could reach Kanpur.  A volunteer civil servant, Thomas Henry Kavanagh, the son of a British soldier, disguised himself as a sepoy and ventured from the Residency aided by a local man named Kananji Lal. He and his scout crossed the entrenchments east of the city and reached the Alambagh to act as a guide to the next relief attempt. For this action, Kavanagh was awarded the Victoria Cross and was the first civilian in British history to be honored with such an award for action during a military conflict.

The strength of the rebels investing Lucknow has been widely estimated from 30,000 to 60,000. They were amply equipped, the sepoy regiments among them were well trained, and they had improved their defenses in response to Havelock's and Outram's first relief of the Residency. The Charbagh Bridge used by Havelock and Outram just north of the Alambagh had been fortified.

At daybreak on 14 November, Campbell commenced his relief of Lucknow. Rather than crossing the Charbagh Bridge and fighting through the tortuous, narrow streets of Lucknow, Campbell opted to make a flanking march to the east and proceed to Dilkusha Park. He would then advance to La Martiniere  and cross the canal as close to the River Gomti as possible. As he advanced, he would secure each position to protect his communications and supply train back to the Alambagh. He would then secure a walled enclosure known as the Secundrabagh and link up with the Residency, whose outer perimeter had been extended by Havelock and Outram to the Chuttur Munzil.

On the evening of 15 November, the Residency was signaled by semaphore, "Advance tomorrow."

The first siege had lasted 87 days, the second siege a further 61.

The rebels were left in control of Lucknow over the following winter, but were prevented from undertaking any other operations by their own lack of unity and by Outram's hold on the easily defended Alambagh. Campbell returned to retake Lucknow, with the attack starting on 6 March. By 21 March 1858 all fighting had ceased.

The history of residency can be traced back to 1774 AD when Nawab Shujaddhaula agreed to have a British resident stationed in Awadh. The Residency was established at Lucknow when the capital of Awadh shifted from Faizabad to Lucknow in the year 1775 AD. Originally the site of The Residency belonged to Sheikhzadas. Nawab Asafuddaula started the construction of Lucknow Residency in the year 1775 AD for the British Resident and his staff and was completed by Nawab Saadat Ali Khan in 1800 AD. Later it was used by the Chief Commissioner fo Awadh. gradually more buildings were added as their requirements grew.
The ruins of The Residency preserved in the same condition in which it came under central protection in the year 1920 AD remind us of the great uprising of 1857. The evidence of First War of Independence of 1857 can be seen in each and every structure of Residency. These structures suffered heavy damages due to constant shelling and counter shelling; some were completely razed to the ground and are in ruins. The Residency complex today consists of ruins of several buildings, each ruin has its own story to tell about the event of 1857 AD. During its historic siege of 1857 AD, these buildings, and every fortified post were named usually after the person who lived there. They were named as Sago's house, Dr. Fayerer's house, Brigade mess, Kanpur Battery, Redan Battery, Sikh Square, Anderson's Post etc and covered an area of about 33 acres.
To understand the clear picture of Residency an excavation was taken up here which has brought to light a number of buried structures including the well-planned sewer system besides remains of the material culture of that period.
This entrance gate was constructed by Nawab Saadat Ali Khan in the honor of Capt. John Bailley who became the resident of Lucknow in the beginning of the 19th century and the portal came to be known as Bailley Guard gate.

Supported by plain columns the longone-storeyedd treasury was finished in 1851 at a cost of Rs. 16897.00. During the revolution of 1857, the central part of this building was convered into an ordinance factory for manufacturing of the Enfield cartridges. 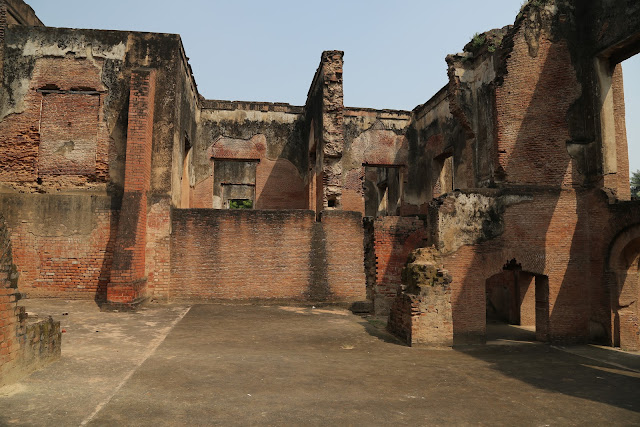 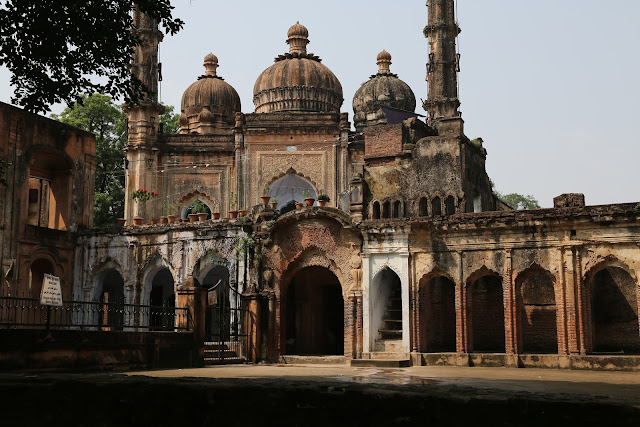 It was named after Dr. Fayrer who was the Resident Surgeon during the siege of 1857. Sir Hennry Lawrence was shifted to this building after being mortally wounded on 2nd July who succumbed to his injuries on 4th July, 1857.

Originally belonged to Asaf-Ud-Daula and subsequently was sold to some Europeans who ran a subiness of European goods. Later on it was occupied by Vilayati Begum Makhdarah Aliya, the Begum of Nasir-ud-din-haider and after her death, her step-sister Sharfunnisa had built an imambara and a mosque at this place in a traditional architectural style of Awadh unlike other building of the Residency.

This hall was constructed by Nawab Saadat Ali Khan. It was probably the most imposing structure in the whole area with its grand apartments and spacious saloons, furnished with costly chandeliers, mirrors and silk diwans. It was used for banquets in honor of Nawab. The fine futniture in the hall was complemented by high quality of workmanship. In the building a stucco fire place at the first floor level still retains a mable like finish and a broken fountain in the main entrance hall exhibits a find example of inlaid mable work in black and white. 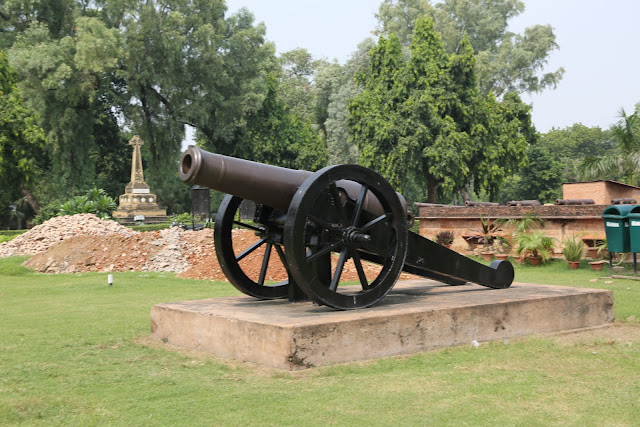 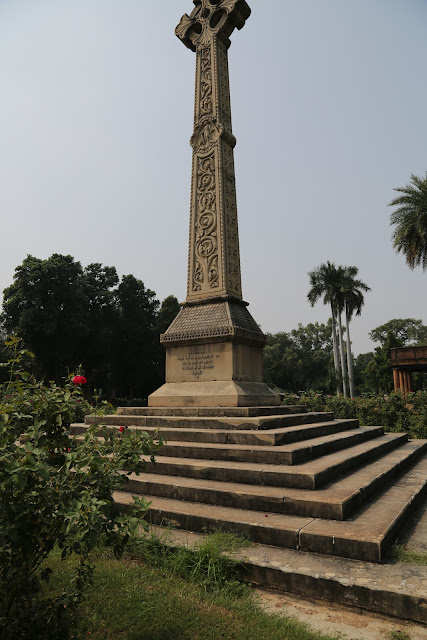 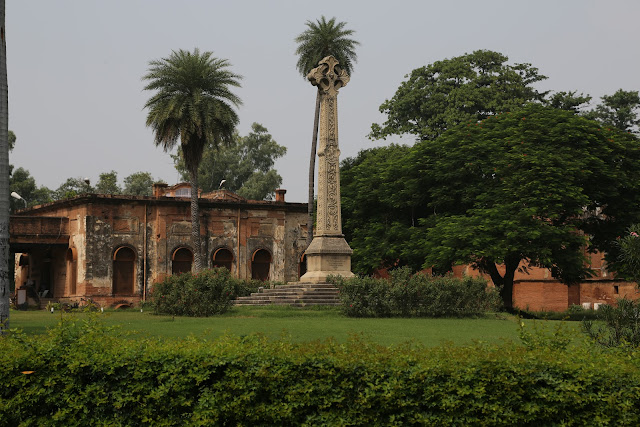 Husainabad clock tower is adjudged as the tallest among all the clock towers in India. it was built as a replica to the BIGBEN clock tower of london. Roskell Payne designed this structure of 67 meter high and it reflects Victorian and Gothic style structural designs. Gunmetal is used for building the clock parts. It’s gigantic pendulum has a length of 14 feet and the dial of the clock is designed in the shape of a 12-petalled flower and bells around it.

Outside the chota imambara is the watch tower called Satkhanda or tower of seven stories. Though it is called Satkhanda, it has only four stories, as the construction of the tower was abandoned when Ali Shah died. Satkhanda was built between 1837–1842 in the time of Muhammad Ali Shah. He wanted to make it the same as Qutub Minar of Delhi and the leaning tower of Pisa. Its main purpose is lunar observation. 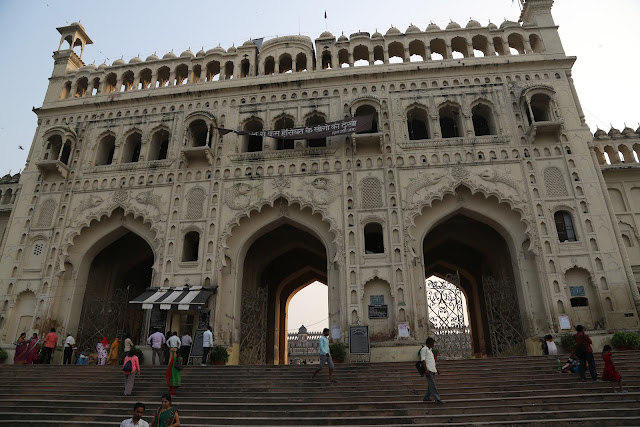 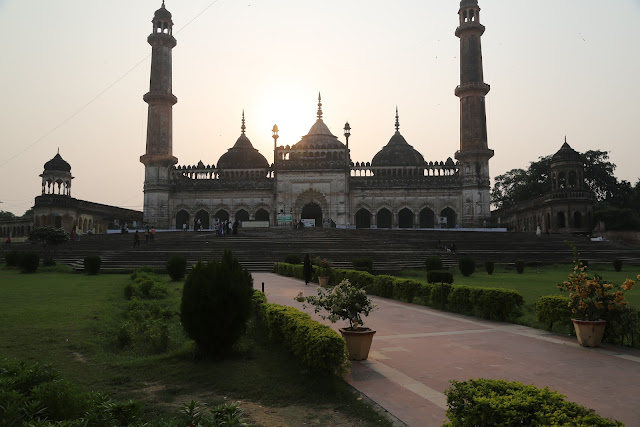 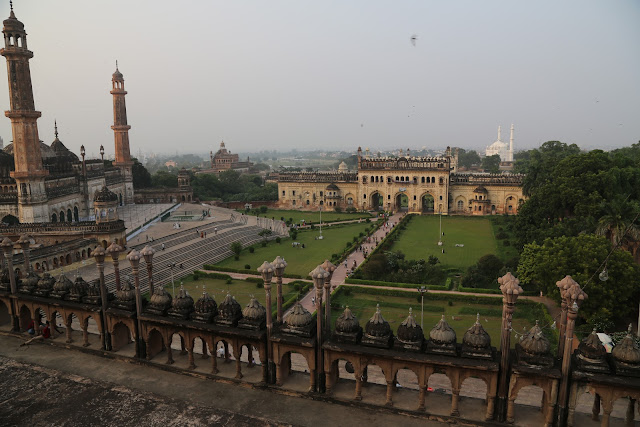 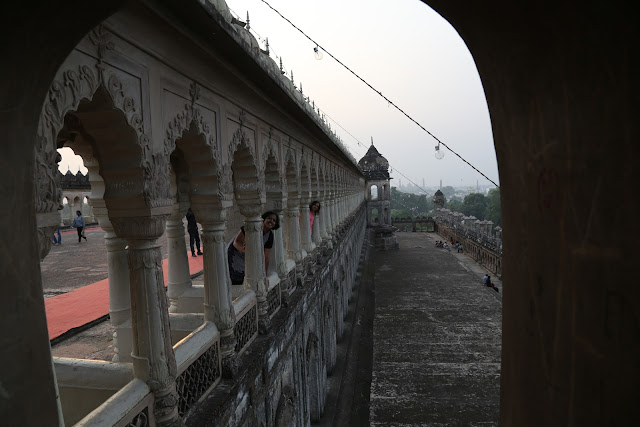 Bada Imambara was built under the royal patronage of Nawab Asat-ud-Daula (1775-97 AD) and designed by architect Kifayatullah, the grandest complex locally known as Bara Imambara contains the graves of Nawab Asaf-ud-Daula and his wife Samsunnisa Begum. Entered through triple arched two gateways, its scheme comprises Naubat Khana on the north. Asafi mosque on the west. Shahi Baoli on the east. While the main building stands on the rear south. The main building of Imambara is a three storeyed building constructed on  a raised platform. There are seven arched openings in the facade and there are three halls made for different concepts known as main hall, measuring 47.71x16.16 meters with a maximum height of 14.65 meters flanked by Chinese hall on the right and Indian hall on the left. Constructed of Lakhauri bricks laid in lime mortar, the monument is exquisitely decorated with stucco work and adorned with parapets and chattris. The interior is ornamented with costly chandeliers, tazias, alams etc. On the top, Bhulbhulaiya or the labryinth with intricate balconies & passeges with 589 identical doorways is special attraction. The complex was built by Asaf-ud-Daula to cater the religous experiments of the muslim community and also as relife measure during the terrible famine of 1784 AD.