23-April-2015
This was a special day, it was reserved for a trek to Taktsang Lhakhang. We were appropriately warned by everybody that it is going to be a hard trek and hard it was. Following is the GPS log of the trek.

8:15 AM We left the resort. The main road turns towards the Tiger's Nest and continues for almost 3 kilometers before you see the parking. Unfortunately for us the entry to this road was jammed because of some religious function and we mistook it for the fact that may be this is the parking and we are not allowed to drive any further. So we parked the car on main road and started walking. We even asked couple of locals about directions and nobody mentioned that we can take car further. So our trek was longer by almost 3 kilometers compared to others.
In the map above the blue star is where the parking is and green pin is where we parked. Anyway, not a big issue.
In the evening, I took a taxi to drop me to the main road and brought my car.

Anyway, a blurb about the place. According to the legend related to this Taktsang which literally means "Tiger's lair", it is believed that Padmasambhava (Guru Rinpoche) flew to this location from Tibet on the back of a tigress from Khenpajong. This place was consecrated to tame the Tiger demon.
An alternative legend holds that a former wife of an emperor, known as Yeshe Tsogyal, willingly became a disciple of Guru Rinpoche (Padmasambahva) in Tibet. She transformed herself into a tigress and carried the Guru on her back from Tibet to the present location of the Taktsang in Bhutan. In one of the caves here, the Guru then performed meditation and emerged in eight incarnated forms (manifestations) and the place became holy. Subsequently, the place came to be known as the “Tiger's Nest”.
10:00 AM We walked up to the parking and started the trek. There are many people selling souvenirs at the start of the trek. One of them convinced us of buying some walking sticks. At the end we realized that it was a good idea, it is very hard to continue the trek if you don't have a support of a walking stick.
One should be very careful with what you carry with you on this trek. Very quickly one gets tired and the luggage starts looking like too much weight. Carry a single bottle of water. There are many taps on the way and one can refill the bottle. There is a cafeteria at approximately half the distance. Don't rush, this trek (for that matter any trek) is not a place to show bravado. Pace yourself. 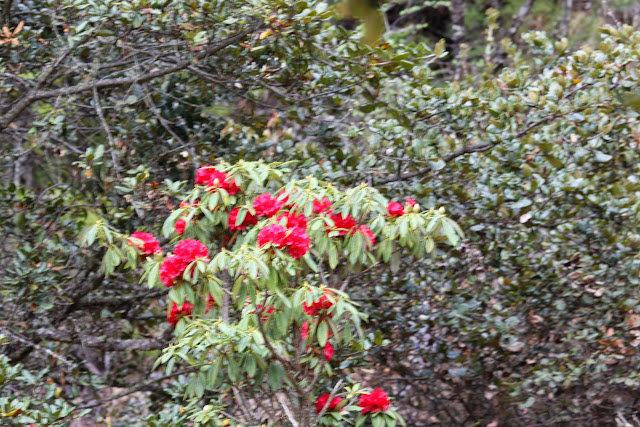 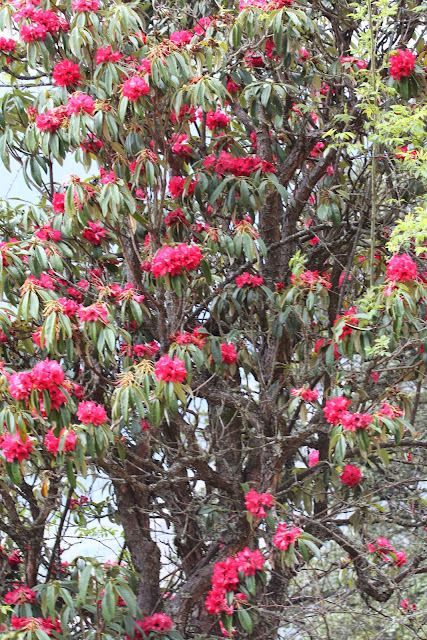 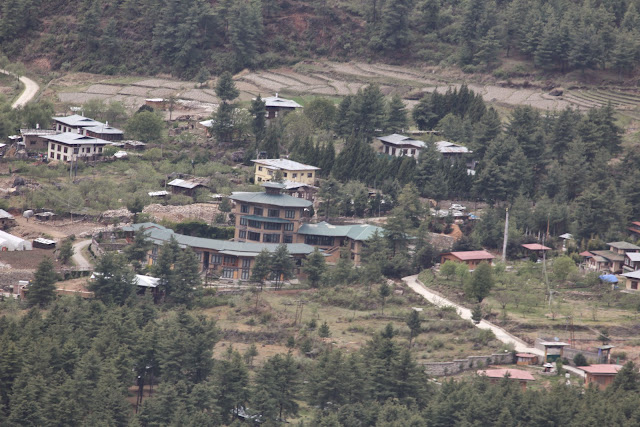 11:30 AM We reached cafeteria. It is prudent to stop at the cafeteria.It gives you much needed rest and you can have something to eat or tea. There are toilets there as well. We did not see toilets in any other place. There are some very good views of Tiger's Nest from cafeteria.

The trek gets steeper from cafeteria. But there are places to sit along the way. 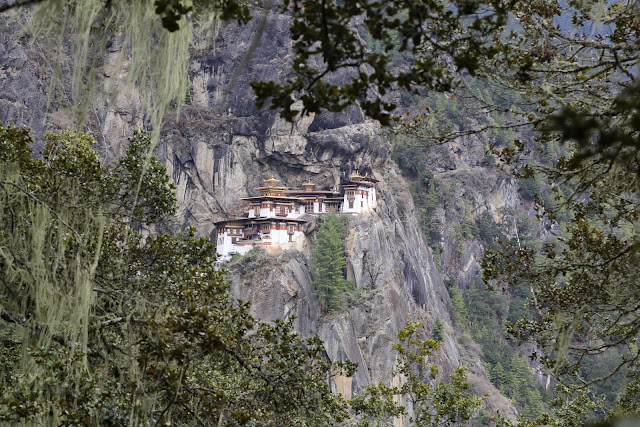 12:15 PM We reached the last stretch. The last stretch consists of steep downwards stairs followed
by steep upwards stairs. This is specifically harder for people who may have knee problems.
Just before you reach the stairs, there is a signage for a hotel on adjacent peak. You can call them and book the place and while returning you can drop in for lunch. We decided to take our chances with the cafeteria. If the cafeteria was open while we reached, then we will have lunch there otherwise we will figure something out, that was the plan.
Anyway, we continue with the stairs. Actually the most magnificent views of Tiger's Nest are just where the stairs start. You are on the top of adjacent hill and you get most Tiger's Nest just in front of your eyes. 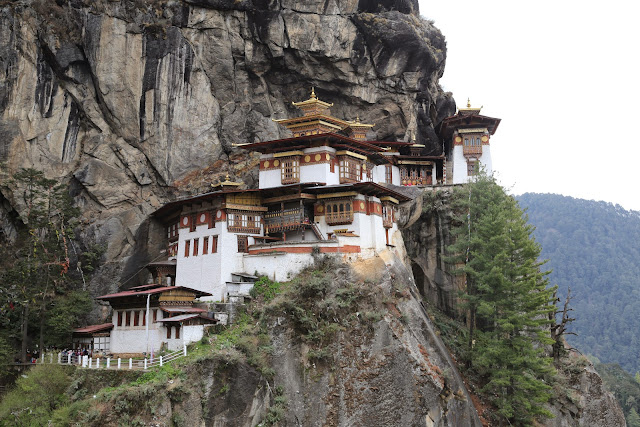 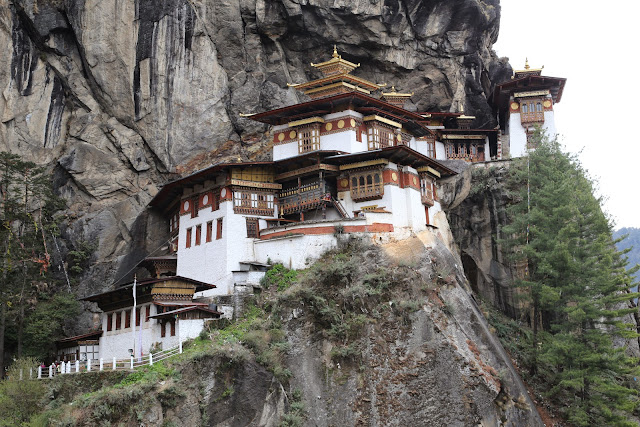 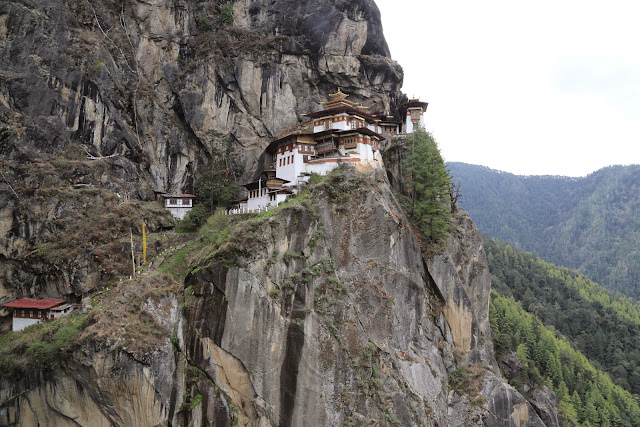 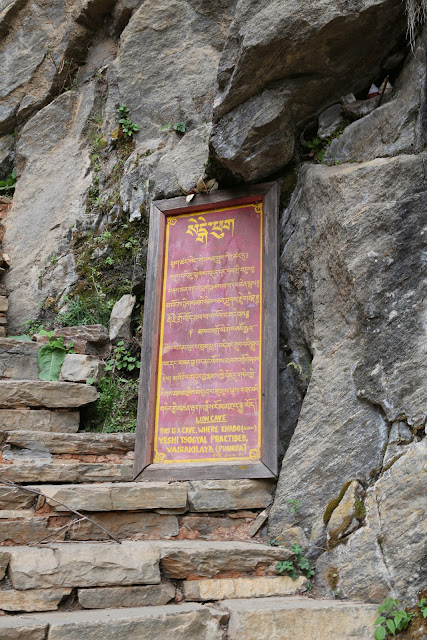 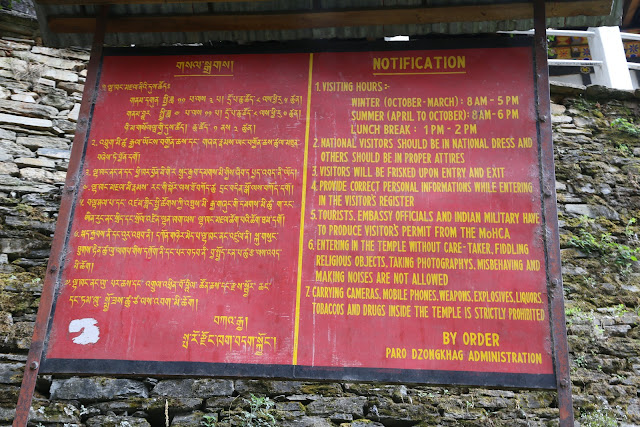 By the time we reached the place, it was closed. It closes between 1 PM and 2 PM. We had to wait for some 20 minutes before you can go in. There is nothing allowed inside. There are lockers and you have to deposit everything, camera, mobile phone, any large bags etc.


2:30 PM We started our trek back. By now we were tired and hungry. We were just hoping that the cafeteria would still have some of that lunch left. While coming up they told us that they would close lunch service at 3 PM. We were sure that we won't reach by 3 PM.
3:15 PM We reached cafeteria, the lunch was still available. It was probably the most simple but most fulfilling meal that we ate in a long time. Rice, Dal, Some vegetables and tea. Anyways, we had lunch lied down on the benches for few minutes and started back.
4:45 PM We reached the parking area. At this time,
we were kicking ourselves for leaving our car on the main road. The thought of walking another 3 kilometers was just very depressing. While my family was doing some souvenir shopping, I requested a taxi driver who was waiting for his guests to drop me till main road. He dropped me to the main road for Rs. 200/-. I brought my car in.
This was the most tiring and fulfilling day in this drive. We headed back to the hotel for a well deserved dinner and sleep.