25-December-2016
9:15 AM Started from Noida towards Hanumangarh. We were not really sure about the route, so we decided to take whatever google maps told us.
9:50 AM Entered Noida-Greater Noida expressway.
10:00 AM Exited the expressway
10:35 AM Reached Paschim Vihar
11:10 AM Reached Bahadurgarh
11:35 AM Crossed Rohad toll plaza. We saw vehicles lining up for a ralley so decided to let their convoy go ahead and stopped at the place that claims to make India's largest paratha. 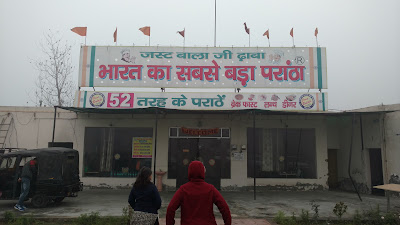 Preparations were going on for some
12:45 PM Finished the paratha and continued on with the journey.

4:25 PM Google maps shows multiple options to turn left to go to Hanumangarh but all the roads were extremely narrow, so we continued driving till Dabwali and then took an extreme left to continue towards Hanumangarh.

The road after Dabwali becomes two lanes undivided road but the surface quality is good and traffic is comparatively less.
5:30 PM We reached the hotel in Hanumangarh. We had decided to stay in Narang Hotel and Restaurant. Here is my review of the place.
Posted by vavasthi at January 16, 2017